Well it might surprise you to learn that VW actually had a “plan” when they created their part numbering system. With a little background information, you too will be able to dissect a VW part number and have a good idea what vehicle the part is for and what the part’s application is. VW part numbers are often stamped or imprinted into the metal, plastic, or rubber of the product itself, so don’t toss your old or worn VW part until you’ve had a look for it’s VW part number.

The following diagram shows the “Anatomy of a VW Part Number”:

There were some exceptions to this part numbering format, but the generalizations below can be relied upon in most instances:

Digits 7, 8, & 9 combined are an arbitrarily assigned Component Number. Digit #9 can also be an indication of what SIDE the part is for, if the part is side specific. Even is RIGHT side, odd is LEFT side.

9 digit VW Part numbers are sometimes followed by letter combinations (a Modification Code) that indicate options or modifications for that part (i.e. parts that come in different colors or sizes). For example, a certain part # may be superceded by a newer (better) version of that part, so it ends in a suffix “A” for the improved part. further improvements result in a “B”, “C”, etc. All these parts fit the designated application, but the suffix tells you what “generation” the part is. 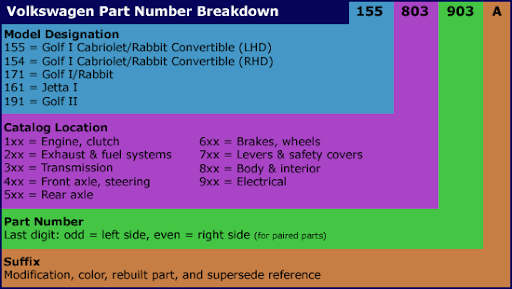 Let’s look at a few examples to clarify your new understanding of the VW numbering system.

Part number 113-301-263C was first used in a Type 1 (in this case, Beetle Sedan and Convertible). The “301” designates this as a transmission part. The “263” is the component number, and the “C” (in this case) means it’s a 4th generation improvement of this part (“A” would have been the first improvement). This particular part is a rear transmission mount for 1973 1/2 and newer Beetles and Super Beetles.

Hope this make it a bit easier to find what you are looking for!